This delightful residential area of 462 homes has long been a desirable place for people to live. Its boundaries extend from Huntington Drive on the south to the south side of Del Mar Boulevard on the north, and from Rosemead Boulevard on the east to the Edison right-of-way on the west. 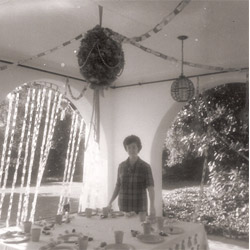 Even before the mission days, this area was the favorite campsite of the California Indians. Here under the sheltering oaks, their cattle grazed on the rich land that extended to the foothills along the base of the beautiful San Gabriel Mountains directly to the north. The area spent many years under the banner of the San Gabriel Mission, founded in 1771 by Father Junipero Serra. Then as the great ranchos were created, a Scotsman named Hugo Reid became the first owner of one of the grants known as Rancho Santa Anita. A succession of owners followed, and in 1869 Alfred B. Chapman, a young graduate of West Point journeying to the frontier posts of Arizona, Colorado, and California, acquired 1,786 acres of the great Santa Anita Rancho for the sum of $10.00 per acre. Several years later Lucky Baldwin purchased the eastern part of Rancho Santa Anita.

The original Chapman purchase extended from the base of the San Gabriel Mountains south to Duarte Road, east to the Lucky Baldwin Ranch and west to the Edison company right-of-way. In 1879, Alfred Chapman built a home near what is now the corner of California Boulevard and Ivydale Court. Because of his keen interest in horticulture, he planted many trees throughout the property. Some of the citrus , walnut, avocado, and pecan trees remain today as a heritage from this far-sighted ranchero for whom our community is named.

In the 1920s, Jim Stewart and Ben Quigley opened a real estate office and began sub-dividing Chapman Woods into the properties we know today. The community began to grow at a rapid rate. Wilson Junior High School graduated its first class in 1926, and Willard Elementary School opened in 1927. Local dignitaries assembled in 1929 to open the San Pasqual bridge over Eaton Canyon Wash, giving residents much more convenient access to Pasadena. During that time, a Grayburn Road resident, Frank Plimpton, made the bricks for the walls along Rosemead Boulevard and Huntington Drive. The walls were built for a cost of $2.00 per linear foot. The 1930s brought the incorporation of the Chapman Woods Association. Annual dues of $2.00 were first collected in 1938; the first Call was published in 1939, and the first Directory of Residents in 1940. In the late 1940s, Chapman Woods boomed, along with the rest of Southern California. Frank Mulvey, whose family lived until just recently in Chapman Woods, operated a real estate office at 510 South Madre until 1983. That location is now the site of a beautiful residence.

It is over a century since the Chapman Family developed their ranch into home sites. For 70 years, the Chapman Woods Association has worked to improve and protect our beautiful area. The history of Chapman Woods is a chapter in the development of California from its mission days and reflects its families and their lasting friendships.